The Coronavirus Lock Downs Were One Big Scam 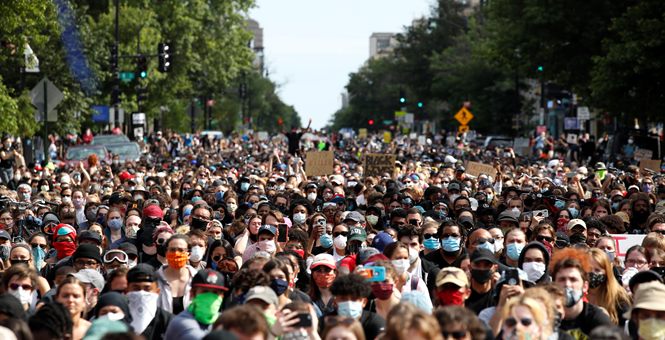 While COVID-19 itself was certainly real and a threat that needed to be dealt with in an evidentiary manner, the past few days have exposed the extended lock downs as a total scam.

Right now, the same officials who told you a week ago that you had to stay in your home so that you wouldn’t kill people are encouraging thousands to take to the streets and protest over George Floyd. While that cause may worthy, the virus does not care about the motives of these crowds. Yet, politicians who were denouncing people going to the beach five minutes ago are now either silent or actively complicit in the face of massive gatherings in their cities and states.

It was just a week ago that the NYT ran a dramatic front cover story about the 100,000 Americans dead with COVID-19. And for months the same media now lauding the mass BLM/antifa protests excoriated “reopen America” protesters. https://t.co/XiV943Q0tH

Some of you were so dizzy from how fast the media turned from “the riots are white nationalism” to “actually, the riots are laudable,” you didn’t even notice that also immune-compromised grandparents marching in crowds is now laudable too. #InThisTogether pic.twitter.com/NYJumSR9nM

Who gets to decide what risks are worth taking and by what standard? Why is someone going to protest for Floyd, who’s killers are in jail and charged with murder, more important than someone trying to save their business and feed their family? The answer is, they aren’t. If the idea is that the risk is worth it today, then it was worth it two weeks ago for a heck of a lot of people. Yet, they were demonized and arrested instead.

The response from mayors and governors who are now ignoring their own pleas about lock downs has been nonsensical at best.

Asked if he was worried that the #GeorgeFlyod protests violated his ban on large gatherings, @GovMurphy says “it’s one thing to protest what day nail salons are opening and it’s another to come out and peaceful protest about somebody who was murdered right before our eyes.”

New York’s Mayor Bill de Blasio, who is still having cops harass Jews for letting their kids play outside, has egged on the protests and claimed that “400 years of racism” outweighs the needs of others to break the lock down. The continuing trope that people who wanted to go back to work and not have their lives destroyed really were just worried about getting their nails done is disgusting.

All of this also paints a picture of clearly unconstitutional conduct, whereby local and state authorities decide in completely arbitrary fashion who gets to exercise their rights and who doesn’t. That’s actual tyranny, not the government breaking up riots the past week.

Meanwhile, those health officials who called you selfish for even thinking about resuming your life? They’ve now decided that protesting is more important than coronavirus as well.

Dozens of public health and disease experts have signed an open letter in support of the nationwide anti-racism protests.

“White supremacy is a lethal public health issue that predates and contributes to COVID-19,” they wrote.https://t.co/EewPNgDSu3

So much for that widely praised nurse who stood in traffic to wag his finger at protestors a few weeks ago. Now, you’ve got healthcare officials joining the protests.

All my hard work and long hours for the last 3 months seems to have been for nothing. #StayAtHome https://t.co/YAD3e1XXc7

Oh, and it’s not just the state and local officials who’ve been exposed as frauds. Nancy Pelosi, who is still currently maintaining that it’s too dangerous for her chamber to even show up to vote, joined the protests in person today. What happened to social distancing and all being in this together?

These lock downs were nothing a scam. They weren’t based in any real science after the first few weeks, yet were perpetrated long past their expiration date by power hungry politicians. In Michigan, even Gov. Whitmer cheered on the protests yesterday, she extended the stay at home order for everyone else another week. It’s laughable.

This was never about the virus. It was about providing cheap political cover for politicians too scared to take responsibility. Keeping you locked up was a way for them to say “see, I’m doing all I can,” even as more and more evidence emerged that it was senseless.

But when a cause that fit their narrative came to the forefront, it was all cast aside in the blink of an eye. You were lied to. When all this is over, I hope people recognize that and hold these people accountable.