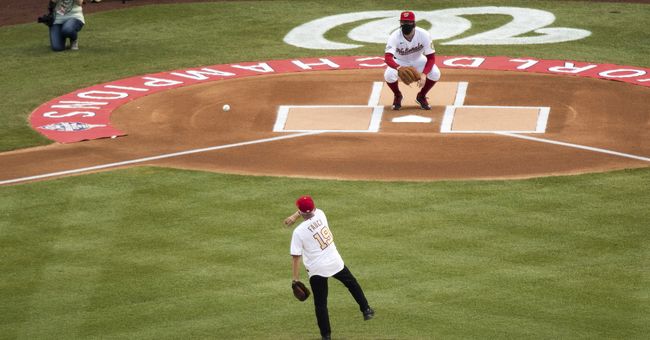 NIAID director Dr. Fauci threw out the first pitch before the start of the New York Yankees-Washington Nationals game last night after much fanfare and hype was stirred up by the mainstream media in the leadup to the big moment.

Fauci’s “pitch” left a bit to be desired, which can also said about other things he’s done throughout the course of the pandemic. But in fairness, pitching is not his area of professional expertise:

Dr. Fauci throwing out the first pitch is all of 2020 in one moment pic.twitter.com/WiXmhx4OFt

In spite of the embarrassing sequence, there were people who believed that Fauci’s pitch coupled with the fact that all players and coaches kneeled in a show of support for the “Black Lives Matter” group was supposed to set off President Trump. Here’s one such example:

How pissed off do you think @realdonaldtrump will be that Washington Nationals are really starting off the pandemic delayed MLB season the right way?

Dr. Fauci throws out the first pitch and every player proceeds to take a knee for a moment of silence.pic.twitter.com/r7TjbTkahV

It didn’t. Instead, Trump was hosting a baseball “opening day” event at the White House with youth baseball players and former New York Yankees Hall of Fame pitcher Mariano Rivera:

Better still, an hour and a half or so after Fauci’s disastrous first pitch, Trump shared this video of his own pitching abilities. Clearly, Trump’s aim is much better:

Not sure about anyone else, but as talk of first pitches was going on yesterday I was reminded about the pretty impressive first pitch President Bush made after 9/11 at Yankee Stadium:

I have no doubt the Usual Suspects are pitching (no pun intended) little fits about Trump trolling Fauci with the pitching video in the middle of a pandemic, but in this writer’s humble opinion it provided us with the humor break we all need right about now.